On account of the xenophobia attacks currently going on in south Africa especially on Nigerians, a Nigerian hip-hop superstar has cancelled her September 21st , 2019 engagement in the country on the late President Nelson Mandela.

Recall that few days ago, social media became awash with videos and pictures of foreigners being attacked in South Africa even as their businesses were also being looted by the South Africans who normally were supposed to be their brothers and sisters.

In response to the barbaric act which seems to have gone beyond what Mr. President
Matamela Cyril Ramaphosa of south Africa can control, various governments of other African countries whose citizens were the targeted victims in the attacks as well as sports and entertainment personalities from the victims’ countries appear to have formed a common front in condemning the unwholesome attack on their citizens in South Africa.

Tiwa Savage, the Nigerian hip-hop sensation who recently got signed up to Universal Music in the United States of America has joined follow celebrities to protest against xenophobia in South Africa. Tiwa Savage today 4th September, 2019 took to her instagram handle to announce to her 7.9 million  followers that she does not only condemn the heinously criminal act of xenophobia in South Africa, she has also cancel her performance slated for September 21st and organized by multichoice, owners of DSTV in South Africa. 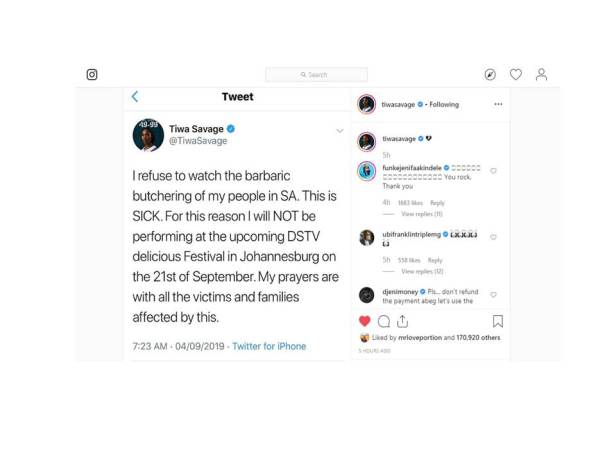 It’s hoped that the government of South Africa headed by Mr. President
Matamela Cyril Ramaphosa will do something quick against xenophobic attacks in his country which predates even his administration.

In coming days, we shall see whether the president of South Africa has what it takes to effectively manage the situation and bring an end to xenophobia in his country for once.

Read loudng.com in ANY Language of your Choice!

Our Top Posts-You Should Read Them Too!